People have been eager to hurtle multiple “Game of the Year” awards to Skyrim, a game that lustily devours critical reception just like its predecessors, Oblivion and Morrowind.

I think that it probably deserves the praise.

But let’s take a step back from the breathtaking world, the amazing sound, and the overall immersive euphoria that the game evokes.

Are we there? Good. No, look away from the radiant waterfalls. Don’t glance at the mountains in the distance that you can definitely climb up.

Close your eyes. Let’s talk about something serious: Skyrim indicates that there are still some things that Bethesda still can’t seem to get right after their fantasy series has gotten three Games of the Years in a row.

I’ve logged the requisite “hundreds of hours” on Morrwind, Oblivion, and Skyrim, so I think I’m qualified to say that there are five reasons that Skyrim is dumb. Not bad, but definitely dumb.

This is something I’ve had to get off my chest for a while. Here goes:

Approximately half of the monsters in the game: human or humanoid.

Once you’ve explored a mountain, a cave, a tomb, a Dwemer ruin, a forest, and a fort of some kind, you’ve generally encountered everything you’ll encounter in Skyrim.

The continent seems to be some kind of cruel, Darwinian experiment. If you’re not a troll, dragon or giant, then you have to be a machine or dead.

Skyrim’s world may be gargantuan, but you’ll find that select species seem to have readily populated every corner of the place, apparently having destroyed all other kinds of monsters in the process.

After a while, any monster becomes a pest. It ambles forward from some patch of bushes (or from the clouds), growls at you for a while, then proceeds to die, so you can continue to look at the scenery in peace.

2. There Are No Characters. 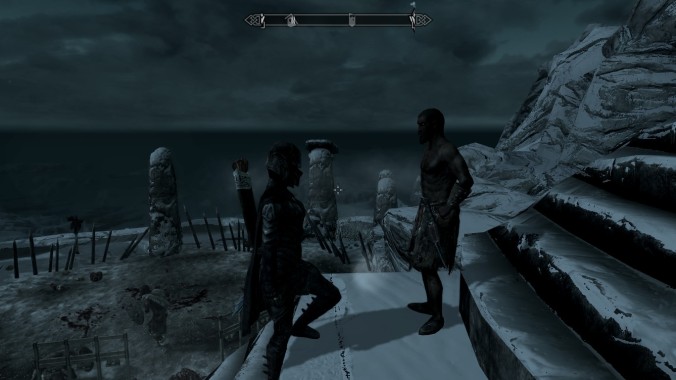 Hi there, what’s your story, why don’t you have a shirt in the mountains here? Oh, okay, I can only ask about your weird god. I didn’t really care about that, but… all right. I guess I don’t care about anything else, since I don’t have any other dialogue options.

Remember Baldur’s Gate? Remember Minsc? God, I didn’t even have to Wikipedia the spelling of his name, that’s how memorable he was.

More recently, there have been the Dragon Age and Mass Effect trilogies. These have things that Skyrim doesn’t: real voice acting and real characters.

And you’re a character, too! You get to ask questions and actually behave like a person.

In Skyrim, you actually have zero options in the game. It’s an open world, but your relationships with characters – and your own character – have a strictly linear path to follow. Even if you get married.

This isn’t to mention the fact that, let’s be fair, the two actors who are the voices behind every single character sound like they inhaled a beehive through their nose and then tried to imitate a German-Russian-Polish accent.

And I swear, if I’m smithing in Whiterun and hear the blacksmith ask if I’ve met her father one more time, I’m going to run her through with the next exquisite weapon I make.

How can you have characters if they all say the same thing and have no personality? How can you even be a character if you have no choice in what you say?

How I Met Your Benor.

Benor and I met a long time ago, on a romantic rock, where we proceeded to beat the living crap out of each other. This isn’t original, by the way, because this is how you meet all of your mercenaries.

After I defeated him, Benor started to fight alongside me. We’ve been through a lot of traumatizing stuff together, including the time I had to reload because he got burnt to a crisp by one of my errant fireballs.

That’s how dedicated I am to him.

Problem is, my character isn’t dedicated to him, and Benor doesn’t have much to say, ever. In fact, he’s a lot like all of the other mercenaries who I burnt to a crisp before. 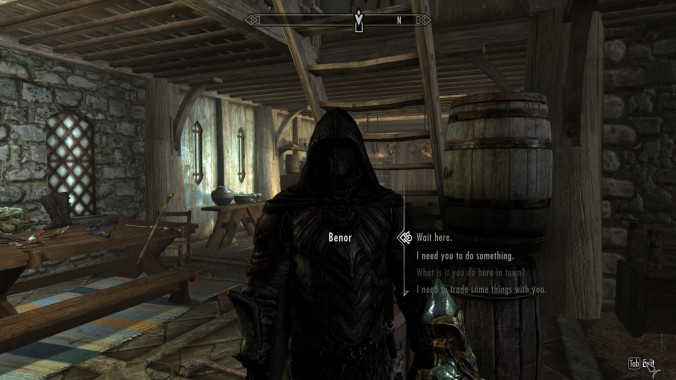 In fact, after all this time – and equipment – I invested in Benor, my character and he both still think he’s in town, doing something else.

Is this really all our friendship means to either Benor or my own character?

This kind of stunted character development puts Skyrim in a very awkward position.

Are we saying that I’m the same person as I was when I was a prisoner instead of Dragonborn, the leader of the Stormcloaks and guildmaster of The Thieve’s Guild?

Why do people I talk to still seem to think the country is at war? Why do people dare treat me like crap if I’m a legend?

How can you role play if there are no opportunities to actually interact with other characters?

Then again, maybe my character has no emotion, just like every other character in the game. Everyone in Skyrim sounds passionless and bored, like they know you’re not going to pay attention anyway, because they have nothing new to say. 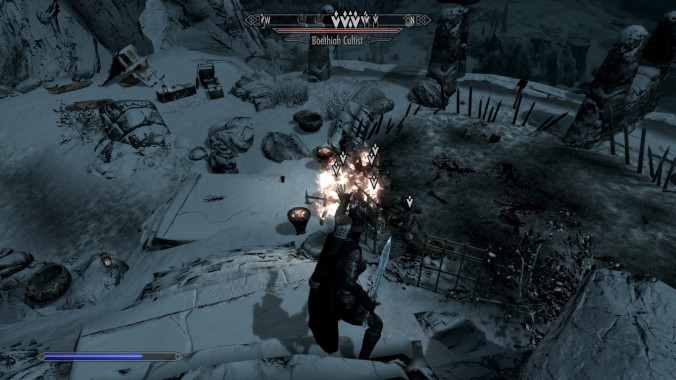 Me, casting any fire spell in the game.

I’ve almost maxed out my Destruction skill, so you would think I could cast some pretty sweet spells. After all, it is a fantasy game that has to follow the eight billion spells available to sorceresses in Diablo II.

How can anyone spend hundreds of years at the College of Winterhold, researching spells, if there are about four or five possible types for each school of magic?

Hell, I’d be in and out of there in one semester.

4. You Get Too Powerful Too Fast.

Oh, bro, I’m so sorry. You haven’t met my sword that freezes everything before?

Okay, I know that “too fast” is a relative term. I don’t think that should matter. Skyrim scales difficulty for a while, but then, abruptly, the end of the scaling arrives and nothing can possibly fight you past level 30.

Not only that, there are no merchants or items that I really want to pick up after about level 10. Nowadays, I leave a wake of bodies litter behind me after every battle, veritable heaps of garbage that will sit neglected and lonely in caves and forests across the country, until the end of time.

Because why should I bother grabbing that thousandth crappy magic item? There’s no reason to make money in Skyrim, because no one has any items of value past a certain level.

I am the 1% of Skyrim, but I can’t even buy luxury goods!

Why not just keep making monsters stronger? I wouldn’t mind. What about a wealthy, 1% city somewhere where everything is expensive and high-level? What about an area with all the high-level monsters?

But no. We have to leave it up to the mod community.

5. The Story is Boring and Unoriginal

Your standard, prophecy-spewing old coot who lives in the mountains and controls the plot.

There can not possibly be another RPG that has sold so many copies and had such an uninspiring story. I’m the Dragonborn? I can talk to dragons? There’s a dragon that wants to eat the world? End story.

I don’t mind the world-saving bit, I would just like to be brought there creatively, via the meandering path of Baldur’s Gate or chaos of Mass Effect, not the business presentation of there-was-a-prophecy-and-you’re-the-guy.

All of the Elder Scrolls have relied on prophecies of a stranger with an uncertain whatever and an unwritten who-cares, as dictated by some old man in a remote location.

Then again, it’s hard to create a compelling narrative when you can’t have a single memorable character in the game.

Why This Doesn’t Matter

Because there are FREAKING ANTS ON STUMPS.

17 thoughts on “5 Reasons Skyrim is Kind Of Dumb”