Last week, the FCC struck down something called “net neutrality.” You might have seen headlines and decided it was boring. Maybe, for a little while, you were curious about the ruling’s meaning.

No one really knows how things are going to work in a post net-neutrality world. But there are a lot of alarm bells ringing. Let’s break it down and then talk about what this could mean for bloggers, writers and musicians.

Banding Together to Limit Bandwidth

The end of net neutrality means that your ISP (Comcast, Verizon, AT&T) no longer has to treat all web traffic equally. So now they can control the amount of bandwidth coming and going from different websites. Essentially, this means a video-heavy website like YouTube or Netflix has to pay more for using all that bandwidth.

Those costs could get passed onto consumers but, more than likely, Netflix won’t do that and will instead see this ruling as a great way to make sure no other Netflix competitors surface – because the cost of becoming a bandwidth-heavy start-up like Pandora or Netflix will be much higher than before.

On the consumer side, well, there’s a lot of speculation. The most popular view is that ISPs are going to create different packages for sets of websites. A basic bandwidth package might include Google, the New York Times, Facebook, etc.

Those sites will still be fast. But second or third-tier sites… forget about it. Cash-strapped, independent news networks might fall to pieces, or abandon multimedia in favor of more text. Oh, and since ISPs can throttle bandwidth whenever they want, that means they can slow traffic to sites they don’t like to a crawl. Which they say they won’t do, and the FCC says they’ll make sure ISPs won’t do.

All I know is that FCC chairman Tom Wheeler was a top lobbyist for cable & mobile companies before becoming FCC chairman.

This may seem pretty grim, but there’s a tiny speck of hope for creative people. Bandwidth-heavy, illegal torrenting clients and websites might take a hit if bandwidth gets throttled – although there are methods to avoid this kind of thing that are too complicated for me to understand.

There’s also the chance that, with more restriction on bandwidth and websites, the flattened, payless, ultra-competitive, saturated landscape plaguing authors and musicians today could be gone tomorrow. Of course, this would end up favoring the few who land in the established media’s good graces.

Well, if ISPs feel like it, they could make any visit to any other website outside of a paid package basically impossible. Leaving us with something like a basic cable package, a curated system of arts vetted by the corporate powers that be… and destroying the democratization of publication that, thus far, the Internet has spawned.

Could this result in a massive upswelling of attention to only the artists and writers and musicians who have gone through the traditional system of gears and pulleys of a publishing house or a record label? It’s possible, especially because anyone else probably won’t be able to afford the bandwidth to support hypothetical fame, or to even show off their art to people who aren’t paying for that package.

Imagine if an indie band asked you to pay $1 to stream a song directly from their website, or if BandCamp charged $5 a month. What would you do?

The argument is speculative, but I got to witness it firsthand on Facebook the other day. Without further ado, here’s some passionate rhetoric to paint all these abstract blanks with color:

My friends, E and A, went at it. E believes strongly that, by raising the bar to entry for self-published artists (because ISPs will naturally direct traffic to corporate-owned sites), the end of net neutrality will be a good thing. 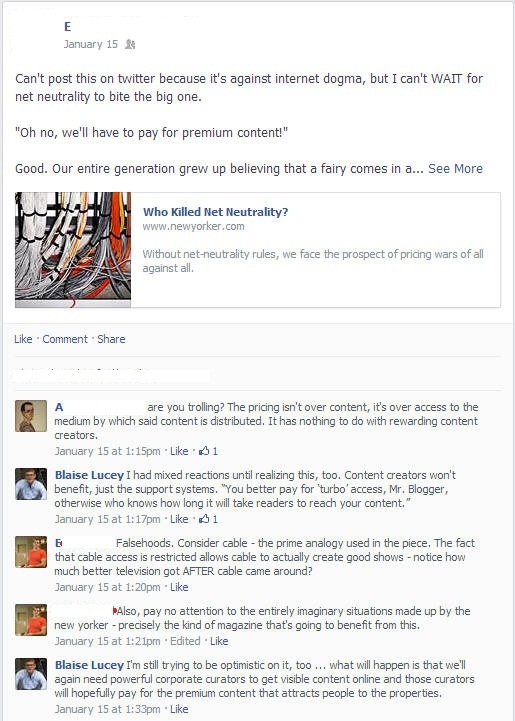 I thought the same thing, kind of, but now that I’ve read more of the material, I’m not sure net neutrality’s demise is going to affect any indie stuff, because it will use too little bandwidth to make a difference. The real impact will be felt across media-heavy tech start-ups (CollegeHumor.com may have to migrate completely to YouTube, for example), not independent artists who have a website with 10 visitors a month. 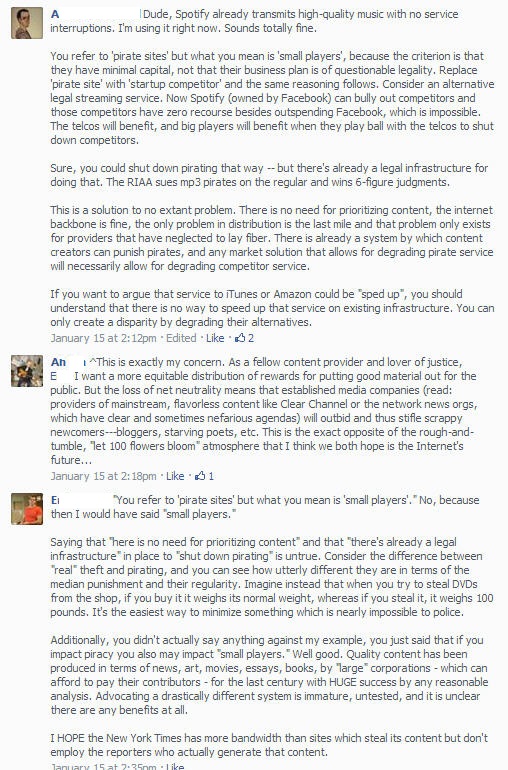 The crux of the debate becomes about the corporate ownership & vetting for creative things. If Internet hotspots become gated communities, then how can independent and anti-establishment pieces get through to the public? 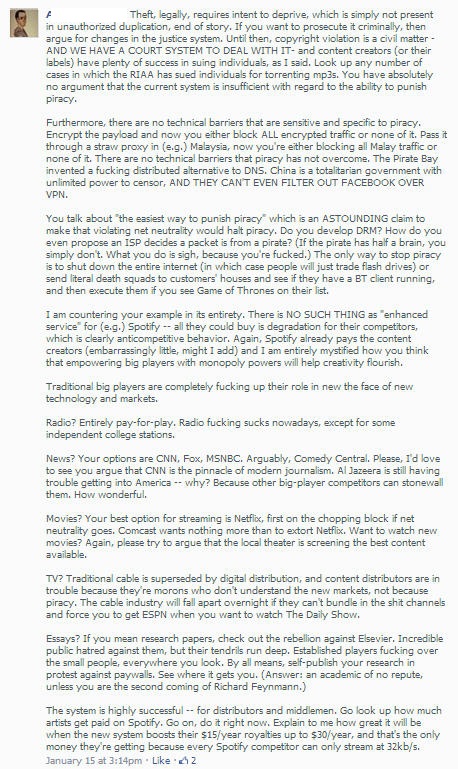 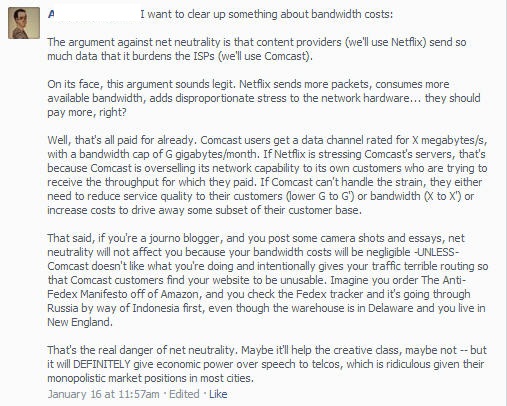 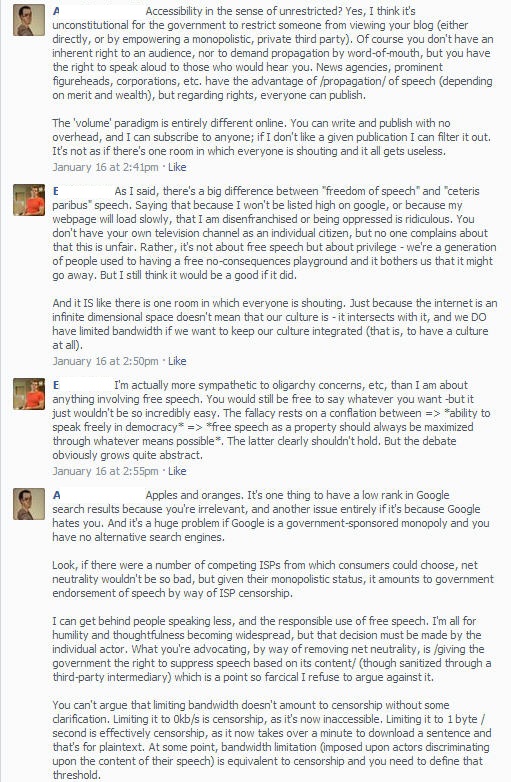 Then, M adds some helpful analogies:

Of course, this gets off the topic of what’s happening to “the creative class” now. E brings it back there. 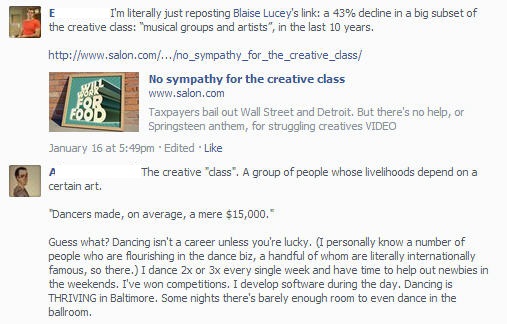 What is art? How much should artists get paid, why should they get paid, and what are they providing as a service?

I think the starkest worries about the ending of net neutrality are mostly unfounded. ISPs won’t intentionally censor websites… that often. They wanted to end it so they could start creating different options for consumers and businesses when it comes to monetizing bandwidth. After all, bandwidth usage is growing exponentially and will continue to do so well into this decade.

The underlying question about what this means for bloggers, writers and musicians might be simple – it might mean nothing. As A explains, dinky little blogs aren’t going to use enough bandwidth to have to pay for it, unless ISPs get really stingy on those limits. But if you say the wrong thing, then ISPs could potentially censor that thing. Or your entire Internet presence.

We could also see E’s utopian ideal: since Comcast is also a content provider, it would naturally favor businesses and creative channels that it already has an established ownership stake, partnership or business interest in. This would create gateways, effectively curating content and driving more traffic to select content creators.

There’s no real answer yet, which is why I just tried to throw in as much information and viewpoints as possible here. I’m still undecided about how much to panic (or not to panic) about the ending of net neutrality.

As some artist said at some point, somewhere, only time will tell.