For New Year’s Eve, I was in Amsterdam, visiting my dad.

At the time, I dared to wander out onto the downtown streets to witness the all-day fireworks marathon around eight or nine at night.

People swarmed the cobbled alleys, plazas, and vast field behind the Van Gogh Museum, where a gargantuan stage was being readied for a band. People stumbled around with open containers, or open… uh… bottles of vodka and whiskey, and generally Reveled.

Fireworks are widely available in the Netherlands and not seen as the evil, life-threatening fire hazard that they are in my native Massachusetts. That meant that everyone and their elderly Dutch grandmother was planting fireworks in open plazas and lighting the fuse.

Everywhere you looked, there were either flaming piles of debris or exploding piles of debris. And, every time the colors arced out into the sky, sparkling amid the unfurling smoke, people turned their smartphones toward the heavens.

Easily half of the masses all had the same instinct when witnessing this spontaneous act of terrifying merriment: record it.

These days, we take it for granted that we want to capture as many memories as possible with our cameras and smartphones. I mean, what’s more important – the fireworks themselves or confirming to everyone on Facebook that you saw them, and making friends wish they were you?

Increasingly, video is becoming an option, too. My ten-year-old brother is the star of his own television show, already an actor in a hundred different clips that he watches over and over on my dad’s iPhone. There has never been a time when so many people can grow up and be so acutely aware of their appearance, their voice, their mannerisms.

I won’t speculate on the possible shifts in psychology when you can look into a moving mirror throughout your life, but I thought that the filming of fireworks was an interesting insight into how we’re desperately trying to grab all of those memories like so many fireflies, and shove them into a jar.

Ever since the paintings on cave walls, we’ve sought to confirm our existence in the world by forcing a narrative onto it. People recorded the fireworks so they could have the option of seeing them forever.

When the present is unsatisfactory, they can immerse themselves in the past. Or, to be less dramatic, people can digitally transport those special moments back overseas and show them to their friends via Facebook and YouTube. 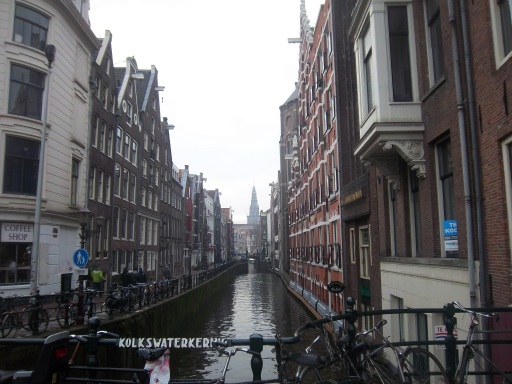 One thing’s for certain, of course: Amsterdam is awesome.

Think about that: we have the technology to grab something special and bring it anywhere we want, to put someone else in that moment with us – while it’s happening, and forever after. There’s just one problem: our memories don’t match reality.

We selectively record the greatest of moments, not all of them. Our feelings and thoughts and bodies change. The person who witnessed those fireworks is far different from the person viewing them ten years later.

Yet the video will be the guide we have to remembering the entire New Year.

We now have the option to editorialize our pasts more than ever before.

You can rifle through hundreds of photos on Facebook and carefully patch together a collage of your preferred moments and identities to represent your profile. 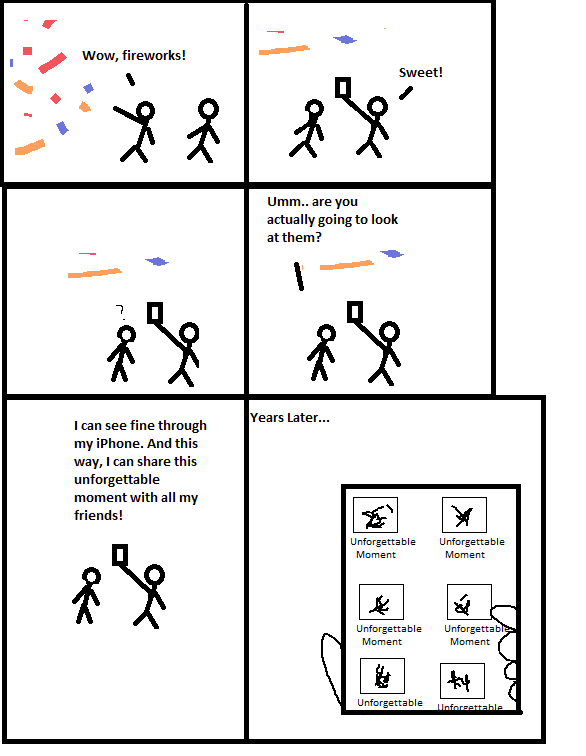 The resulting tapestry represents not how you changed, but how you think you changed or how you wanted to change. These crystallized moments become the cairn stones that lead us, zig-zagging, through the confusing pathways of our lives, our references to what has happened to us over a lifetime.

Portable video is only going to get easier, more brilliantly real, and we’re constantly inventing new ways to reinvent our pasts.

Take the contacts that can show computer screens. There will be a point where we can put these into our eyes and be wholly immersed in a video of our past. Add an accompanying pair of futuristic earphones.

Put yourself in a room where sensations are coupled with the recorded sounds. When wind blows, you feel the chill. When fireworks crackle, you feel the reverberation.

It’s ironic, that the future is so swiftly bringing us to a point where we’ll never have to leave the past.

Imagine that you can purchase those contact lenses and earphones for any recorded experience you want to have. Not only will you be able to customize your own life, you’ll be able to make someone else’s moments your own.

When we think about the future, we often think about flying cars and teleport pads, but that may be the opposite of what happens, since apparently we’ve always been seeking a future where we don’t have to go anywhere to experience everything.

This blog post is the basis for one of the satirical short stories in my collection, “Technology & Culture Stink.” Check it out!

One thought on “When Does the iPhone Become an iMemory?”