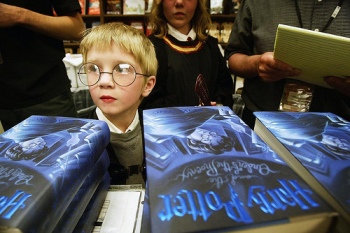 By now, anyone in the literary world… who reads Internet News… has learned that J.K. Rowling released a novel about four months ago under a man’s name. Robert Galbraith, to be exact.

The book, The Cuckoo’s Calling, sold a whopping 1,500 copies in four months. Meanwhile, Harry Potter and the Deathly Hallows, by contrast, sold 8.3 million copies in one day. Fifteen hundred copies means that the book sold at a clip of about 10-15 a day.

Now, of course, it’s sprung to the top of bestseller lists, because J.K. Rowling is a big, established author. But this interesting – and bold – decision of Rowling’s highlights something that’s a little scary: the “discoverability” problem for new authors.

What Does It Take to Get Discovered?

This is an idea first pointed out by Nancy Bileau at writing blog Book Pregnant (who says only 500 were sold in that four-month anonymity period, but NY Daily News says differently… not sure who to believe).

She sums up the problem pretty succinctly:

How bad is the problem? Bileau interviewed Peter Hildick-Smith of book research firm Codex Group to figure that out. He told her:

So this is clearly a genre problem. Some readers are much more open to taking risks than others, when it comes to their reading experience. That, of course, is a problem of convincing people your writing will be worth it.

Ironically, we’re killing the things that vet and curate books for quality and then we’re reluctant to step into the world we’ve created.

I think the music world is suffering from this same core issue: how do you get discovered when publishing is as easy as clicking a mouse or tapping a screen? More importantly, how do you stay discovered?

The Risks of Ease-of-Access

A book that can be instantly downloaded onto a smartphone – for free – makes you treat it differently, and experience it differently. I just downloaded a free eBook of a self-published fantasy author (The Emperor’s Edge) and read it on the bus. It was entertaining.

Am I going to buy the next book in the series? Probably not. I have other stuff to read.

I have a hard time figuring out whether that’s because the smartphone reading experience is bad, it makes me read it more impatiently (“Isn’t this over yet?”), or if it’s a quality issue. I can safely say the quality is worse than some fantasy books published traditionally, but not all of them. That’s a preference issue, more than anything else.

So, really, what’s the difference?

I haven’t finished The Emperor’s Edge, but it’s around whenever I need it. The problem is that I found a website today that mentioned a book in passing that sounded interesting, so I bought that one. For my phone.

The problem with that is that I already bought another book to read. Oh, and before the fantasy book, I was reading Wool by Hugh Howey, the champion of the self-published. Didn’t finish that, either.

This isn’t so much a quality or discoverability problem as a saturation problem.

The one-click entertainment experience is tempting and gratifying. For a while. Then, you want to click something else. I think I have three books in three different rooms waiting for me, and now I have two on my phone.

Our rate of consumption for books is not matched by any other form of entertainment. Ease-of-access + books = perpetual backlog.

Authors have been taught by Amazon to give away their stuff for free and sales are inevitable. That used to be true, as some self-published authors can attest in torturous testimonials that get emailed to me every month, but now so many books are free that it’s hard to actually value them, the experience, and the writing within.

I used to finish every book I picked up, no matter what, but now it’s so easy to replace ones that bore me for even one chapter that I replace them.

What do you think? Is this a saturation issue, because competition is fiercer than before? Will things get better when everyone becomes accustomed to the e-reading experience and is willing to take more risks? Or will saturation overcome the eBook market, leaving no profit for authors at all?

4 thoughts on “J.K. Rowling and the New Author’s Discoverability Problem”