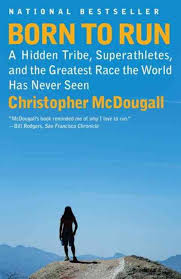 Engrossing vessels of unparalleled knowledge, learning, and experience… or obsolete hunks  of text that can’t hope to compete in an era of relentlessly over-stimulated people?

The question struck me when I was reading Christopher McDougall’s Born to Run recently.

I like to run. I like learning things. And I’m not adverse to being taken to far-off, fantastical lands.

But, about halfway through, I was growing increasingly frustrated that I couldn’t actually see the things that McDougall was talking about.

The feeling left me with one pressing question:

Is there something wrong with me?

It’s taken for granted that “adult books” aren’t going to have pictures.

That defeats the immersive, imaginative purpose of a book itself, right?

Anyone like me, who starts growing restless at the fact that they can’t see the stuff in the book, that’s got to be some symptom of impaired imagination.

Or maybe it’s something else.

Because as I forced myself to stay on my couch, reading this engrossing book about a tribe that has essentially not stopped running for generations, ultra-marathoners who are crazy enough to go out into the desert to race said tribe, scientists whose job is to stick thermometers in cheetah butts, and the erratic nature of a mysterious weirdo, my mind kept wandering to the same questions:

I gave into temptation.

Before I had finished the book, I sprang onto my computer.

This is what I did, in order:

1. Used Wikipedia to look up “Scott Jurek,” “Jenn Shelton,” and the mysterious weirdo

2. Used Google Images to look at pictures of the desert and the tribe, the Tarahumara

3. Used Google Images to see pictures from a photographer who had been at the race between the tribe’s finest runners & the ultra-marathoners: 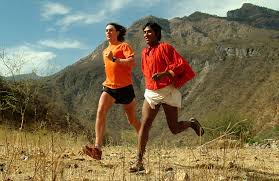 This made for a far richer experience

Let’s think about these instincts for a second.

The internet is so ingrained in my brain at this point, it was almost irritating that I couldn’t more accurately view things that I knew were real.

I didn’t want to replace the vivid descriptions from Born to Run with these images, nor did I want to cross-reference McDougall’s biographical tidbits.

I wanted to complement them, because the internet has made us used to instantaneous, complementary materials.

Songs? Give us the lyrics.

A new band? Give us all of their songs.

A writer? Show us some blog posts.

Tell me who they are, what they do, and why they do it.

I want to know, because, in this golden age of connectivity and instant information, “knowing” everything you want to know is taken for granted.

And so is experiencing things with all of your senses.

eBooks, in the fifth dimension

I’ve already speculated about how, since tablets are clearly killing e-Reader sales, books are going to have to compete with not just other books, but other stimuli: music, funny videos, stupid games, etc.

The natural consequence of that is that writers, musicians, and visual artists are all going to have to either tantalize every sense or give extremely deep, complementary materials to readers in order to get popular.

Some authors are ahead of this nascent trend. Jodi Picqualt’s Sing You Home has a musical component:

My friend and I have screwed around with this concept, too, by making music videos to our improvised songs. Videos that have other messages in them.

Think about this very hard

But, here’s the thing:

What does this mean?

It means making your writing not necessarily a multimedia experience, but multi-dimensional one.

Have those extra resources on hand for your readers to deepen their experience, whether through an author Facebook Page, a blog, or some pictures.

In the coming years, it’s going to be taken for granted that entertainment is multi-dimensional – music, books, videos, whatever – are not going to just tease one or two senses, but all of them.

2. Creativity is going to be so, so much more than just about writing or drawing, it’s going to be a package deal.

3. Collaboration between artists is going to be a new norm, as talent finds other talent to create even greater pieces.

4. You can create a multimedia experience by doing something as basic as including more pictures in your book or just having an active blog with background about your writing.

5. If you want to get started in making your book multi-dimensional, try downloading my free guide about how creative people can use a blog to show off their work.