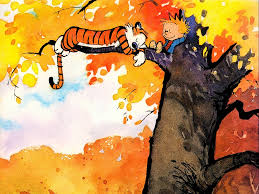 I’ve wondered before whether commercial eBooks are the only things that have a chance of selling if you self-publish, speculating that writers hoping to strike some chord of deeper meaning are going to have to start creating candy apples: books with a sweet, commercial skin and a nutritious, meaningful core.

That’s what Watterson did with Calvin & Hobbes. He knows it, too. That’s why there are so many tortured debates about the merit of commercial art in his strips.

As he confesses in his only public speech ever:

As my comic strip became popular, the pressure to capitalize on that popularity increased to the point where I was spending almost as much time screaming at executives as drawing.

Cartoon merchandising is a $12 billion dollar a year industry and the syndicate understandably wanted a piece of that pie. But the more I though about what they wanted to do with my creation, the more inconsistent it seemed with the reasons I draw cartoons.

Selling out is usually more a matter of buying in. Sell out, and you’re really buying into someone else’s system of values, rules and rewards.

So who did Bill Watterson resist selling out to?

Well, Steven Spielberg, to name one. Yes, according to his editor, Lee Salem, Spielberg’s assistant called Salem, asked for Watterson, and Watterson asked, “Well, why would I want to speak with him?”

As writers ponder what it means to make candy apples, it’s hard to think of artistic control without thinking about the audience to which we’re writing.

Writing a book is hard enough. Writing one that people will read seems nearly impossible.

Watterson did it. He did it with a perfect candy apple approach: a commercially viable relationship between a boy and an imaginary stuffed animal, a boy with some very striking resemblances to Dennis the Menace.

He kept going deeper. He managed to make comic strips in multiple dimensions: you could read them on the surface and laugh or you could read into the context and think.

No approach was right or wrong, but everyone appreciated the creation.

Watterson hates the public spotlight. So much so that when someone writing a book about Calvin & Hobbes actually went and found where he lives in Ohio, Watterson still declined the interview.

In 2005, Gene Weingarten from The Washington Post was sent a gift of a first edition Barnaby book as an incentive for Watterson’s cooperation. He passed this, along with a message, to Watterson’s parents and declared he would wait in the hotel for as long as it took Watterson to contact him. The next day, Watterson’s editor Lee Salem called to tell him that the cartoonist would not be coming.

An artist who knows when to let go of his creation is the best artist of all. Now, we can be thankful there’s not some committee-made Calvin & Hobbes show still running on Nickelodeon, a breathless, toothless caricature of the deep, ever-lasting comic strip.

1. Mass appeal doesn’t have to be antithetical to art.

3. Making the message accessible is the way you can spread your message further than your core audience.

4. Watterson’s appeal ultimately made him able to control his creation: although there was a clause in his contract allowing for merchandising, Lee Salem says that it was in the syndicate’s best interest not to pursue it.