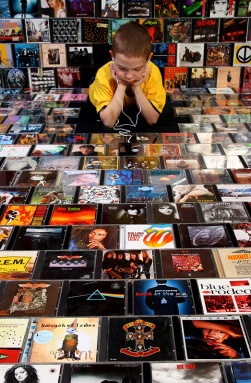 It’s harder than ever -literally, ever – for bands to sell CDs at shows. People just don’t buy them anymore. CD sales are at an all-time low.

In 2013, that number dropped to 289.41 million. This past January, sales reached another record weekly low.

My laptop doesn’t even have a place to put CDs. Itunes has been offering a digital alternative for years. Streaming radio stations like Spotify & Pandora have made the process of music-to-ears even smoother… and free-er.

But bands keep trying to sell them shows, because it’s still one of the most straightforward ways to make money from music. But trying to sell a CD at a show full of music lovers with smartphones is like trying to sell a DVD to someone with Netflix. Or iTunes. Or Amazon. Or Google Play.

Trust me, they’ve moved onto something else.

Think about the year 2000. No smartphones. A barely cognizant Internet. No social media – not even MySpace. That’s the era that bands enter when they try to hawk CDs as their sole piece of merchandise at shows.

CDs are nice to have. I started buying them again recently, mostly as reminders of good shows I’ve seen. Then, I upload the CDs to iTunes and never touch them again. They’re colorful mementos for a special little shelf. I also still buy digital albums, which are going obsolete, too.

Here’s the thing – when bands sell CDs, they’re targeting people who are hardcore music fans who still do something quaint like “pay” for music. Those kinds of fans will approach you anyway, or find your stuff on iTunes.

The mid-market listener has been cannibalized by streaming radio. They’re not used to paying for music anymore… unless they have a really good reason.

Here’s the thing that bands ignore: we live in an age where consumers are doing more research than ever. There’s a whole legion of hipsters out there who move to a new city and are terrified of stepping foot into a place that hasn’t been properly Yelped (a la “Brave Woman Enters Restaurant Without First Looking It Up Online).

Asking someone to do something as bold as buying an album without listening to the whole thing first is nearly unthinkable. You can sell CDs at shows, but you have to adapt to the new way people buy, listen, and interact.

First off, make sure you have Square. The power of accepting debit and credit cards is enough to make any band a god. If you’re playing at a bar, the odds are good that most people have spent their money on drinks and don’t have much cash left over for your CD.

Square’s a fancy little plastic thing that essentially turns a smartphone into a cash register.

Also, consider selling CDs for $5. That’s the equivalent of a drink.

CDs are turning into cassettes. Not only do people not buy them, they don’t even have the right machinery to run them. Alongside smartphones, tablet computers are becoming explosively popular. Neither can run CDs, but both play music.

There are a lot of websites, like Bands On a Budget, that let you upload an image and then create twenty coffee mugs. Or stickers, or coozies, or whatever. Just try not to think about the fact that your revenue stream to support your music is being supported by the bottom-dollar prices made possible by shady factories in Asian countries. No one else does. Sorry, had to throw that in there.

Anyway, you should offer the CD as part of that merch. Not a physical CD, but a digital download from BandCamp or something to anyone that buys a piece of merch. Casual listeners who see some other cool item are more likely to buy something if they know they’ll get a trinket for their trouble.

Email marketing is better than social media marketing. Personal, direct interaction is great. Your band stands out a lot more than when you can cut through the baby photos and party photos of Facebook, straight to the inbox people are already checking for bills or school announcements.

How do you encourage people to sign up for an email list? Proclaim very loudly and boldly that they’ll get a free CD or a free song emailed to them after signing up.

Try Constant Contact or MailChimp for email marketing. Once you have a decent email list, you can send people notifications whenever you have

Empty merch tables at local shows are very sad. Bands know that they can get compliments, applause, and free drink tickets and still not sell a single CD.

Why? Well, the experience of a local show has stayed pretty much the same, but the consumption of music afterwards has changed dramatically.

“Paying” for music has become optional at best and everyone is used to the idea that they can research a band later to see if a CD is actually going to be worth it. That’s why you need to somehow stay in touch with fans after the show. Only by building an ongoing relationship can you really make the most of every bar, coffee shop and venue you play.

Want to read more? Check out For Bands.