Recently, I found my way to a blog post about giving compelling business presentations and something struck me – the best time to market your band isn’t when you’re sitting behind a keyboard and rattling away on a website or tweeting YouTube clips at people.

It’s when you’re on stage.

And it’s not just the music. Anyone who has been to local shows knows that a good part of the audience is only half-listening to the music. Your job is to convince them that it’s worth paying attention… and the way to do that is to start moving.

END_OF_DOCUMENT_TOKEN_TO_BE_REPLACED

It’s been an uphill battle for indie musicians to make a living. Forever. Dwindling CD sales haven’t helped much, either, along with the pittances paid by streaming radio stations like Pandora and Spotify.

Well, as rumored, YouTube is planning a premium subscription music service now. And, as expected, indie artists are apparently getting way worse deals than the major labels. If they don’t sign onto the new service as it rolls out, they risk being dropped from YouTube “in a matter of days.”

That would be fine if YouTube wasn’t aggressively persuading (ahem, forcing) indies to join the music service.

[Trade organization] WIN claims that the company [YouTube] has signed lucrative licensing deals with major labels Universal, Warner and Sony, while demanding that independent labels sign up to inferior terms or face having their videos blocked from YouTube’s free service.

Seem a little harsh? Maybe, you might be thinking, the videos would just be blocked from YouTube’s new music service, not the whole site. According to WIN – and clarified by The Guardian:

That means the rug has essentially been ripped out from underneath musicians’ feet. All of the music videos, albums, and songs independent artists have uploaded to YouTube, the things that have gotten thousands upon thousands of views for YouTube… might disappear. If you don’t sign something.

So how did we get here? And is there any escape?

END_OF_DOCUMENT_TOKEN_TO_BE_REPLACED

It’s harder than ever -literally, ever – for bands to sell CDs at shows. People just don’t buy them anymore. CD sales are at an all-time low.

In 2013, that number dropped to 289.41 million. This past January, sales reached another record weekly low.

My laptop doesn’t even have a place to put CDs. Itunes has been offering a digital alternative for years. Streaming radio stations like Spotify & Pandora have made the process of music-to-ears even smoother… and free-er.

But bands keep trying to sell them shows, because it’s still one of the most straightforward ways to make money from music. But trying to sell a CD at a show full of music lovers with smartphones is like trying to sell a DVD to someone with Netflix. Or iTunes. Or Amazon. Or Google Play.

Trust me, they’ve moved onto something else.

END_OF_DOCUMENT_TOKEN_TO_BE_REPLACED 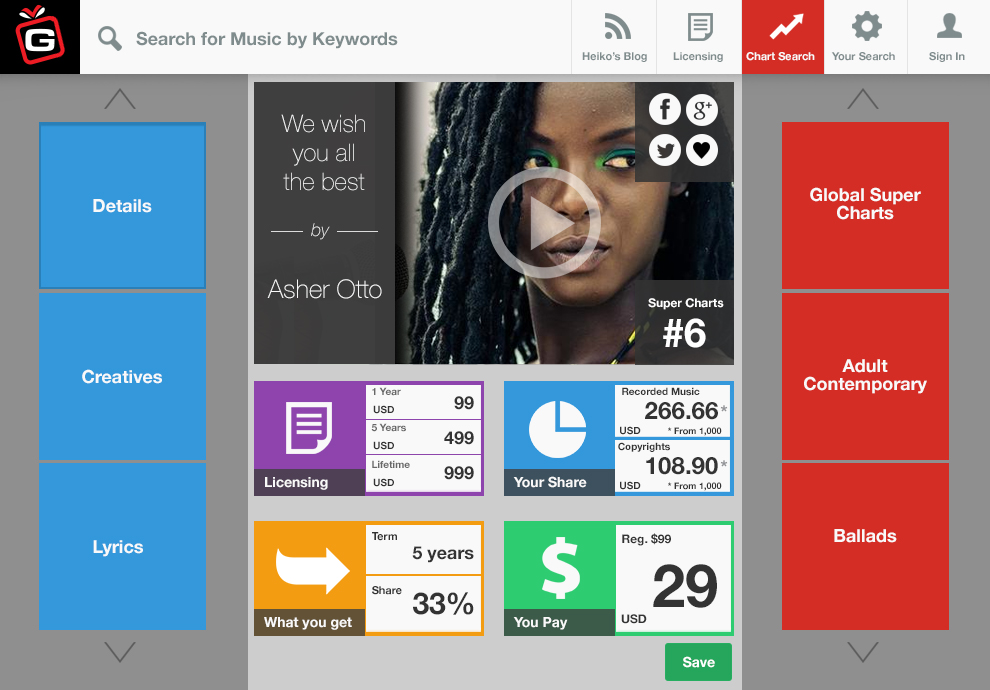 Online marketing for music has been one of the most hyped up things in the past few years. It seems simple, right? You release a song online. Promote it through some savvy Facebook marketing or YouTube videos.

As most bands know, the reality is different. You can drop $50 “boosting” a Facebook post for $0 in return. YouTube channels become haunted houses of cobwebs and shakily filmed videos of you playing in an empty bar. And streaming stations have destroyed a mid-market brand of listener and both Spotify and Pandora pay musicians terribly.

In the pursuit of precious exposure, musicians are leaving revenue far, far behind.

I haven’t yet come across a reliable way for bands to make (decent) money online… but I think I might have found one on the horizon. Gideen is a start-up, an online music platform that taps the best of every world to create what CEO Heiko Schmidt calls “a 3.0 music business model,” which casts aside the $1 song completely.

Fueled by fans, musicians, advertisers, artists of all stripes and a lot of songs, Gideen is hoping to revolutionize traditional licensing and revenue models in the music industry. Right now, the company is hosting an IndieGoGo campaign to fund it all.

Here’s what Schmidt had to say about Gideen, music marketing and the music industry in general:

END_OF_DOCUMENT_TOKEN_TO_BE_REPLACED

You may have noticed something if you have a Facebook Page to promote your band – fewer and fewer people are seeing it. It’s not that people have decided to “dislike” the Page. It’s that they honestly, truly, can’t see your band’s Facebook posts anymore.

What once used to be a ripe old 50% of your fans might now be closer to 30%. Embarrassing things like “16 People Saw This Post” show up in Facebook’s sophisticated analytics captions.

END_OF_DOCUMENT_TOKEN_TO_BE_REPLACED

A few years ago, I saw a video kicking around Facebook called “How to Trick People Into Thinking You’re Good Looking.”

It was a standard YouTube video: a webcam photoshoot of some person, doing something. This video was pretty funny, and featured a monologue by someone named Jenna Marbles.

Today, Jenna Marbles’ YouTube earnings are valued at over $4 million. “How to Trick People Into Thinking You’re Good Looking” has over 55,000,000 views. The channel for Jenna Marbles videos has over a billion views.

Where’s all this money coming from? YouTube. How? Ads.

END_OF_DOCUMENT_TOKEN_TO_BE_REPLACED

Facebook for bands is a Rubik’s Cube. If it works, it can really work. But if it doesn’t… it’s embarrassing.

A lot of bands use Facebook on a less-than-monthly basis, but there’s some power to steadily creating a stream of content for fans. In fact, I realized the impact of social media when I was waiting to buy a CD, “The Catalyst Fire” by Dead Letter Circus, for almost three months.

That’s kind of a miracle. The “album” as a concept is dying because singles are selling so much better. Not only that, “anticipation” for a creative product is almost a foreign feeling on the Internet, where we’re entitled to instant downloads and streaming.

But there I was, waiting impatiently for October 29 when I could finally buy an album that had been on YouTube since August and available in Australia for months.

So what happened? Social media. Specifically, Facebook. Dead Letter Circus – and what I suspect is some help from the band’s album label, UNFED – brought social media marketing to some next level craziness and it worked. The album debuted at #2 on the ARIA Album Chart.

Here’s what any band can learn about social media from Dead Letter Circus:

END_OF_DOCUMENT_TOKEN_TO_BE_REPLACED

Last week, I ventured out to see a band I had discovered on Pandora – El Ten Eleven. I’ve known about them since 2009, when their song, “My Only Swerving,” emerged onto one of my radio stations.

Ever since I graduated college and moved to a place where bands actually visit, I’ve been periodically checking to see whether El Ten Eleven is making any East Coast tours. But they usually don’t, because they’re a West Coast band and incredibly obscure.

After all, they’re not just an instrumental band, they’re a duo. Yup, that’s right – there’s a drummer and bassist-guitarist guy. When they finally did come around to Boston, I grabbed tickets. I brought friends.

“Who are they?” Friends asked.

“Don’t worry about it, I found them on Pandora,” I said. And I wasn’t the only one.

END_OF_DOCUMENT_TOKEN_TO_BE_REPLACED

Bands have a lot of different attitudes when it comes to how they use Facebook.

You’ve got the guys who don’t like to fill out any information. Then the ones who prefer to post vague and mysterious, almost nonsensical blocks of text. You’ve also got overly gracious bands that thank fans for being at shows or buying an album or posting on their wall.

Most, though, reserve Facebook for just a few things: behind-the-scenes photos, concert pictures and announcements.

That’s usually the case whether your band’s Facebook Page has 10 Likes or 10,000. The real curiosity, then, is why all those Likes don’t translate into something more tangible a lot of the time.

Every band has been there: You post something about an upcoming show, sit back and… no one likes the post. Or comments.

Why? The truth is that only 15 percent of your fans see your posts. If the average band has about 200 Facebook fans, that means 30 people see that you’re having a show.

What’s the solution? Get email addresses. And keep getting them.

END_OF_DOCUMENT_TOKEN_TO_BE_REPLACED

Last week, Thom Yorke of Radiohead caused something of an uproar when he proclaimed that he was pulling his music (or at least the stuff he held the rights to) from the online streaming service, Spotify.

He wasn’t worried for himself, really, but for the bands and musicians looking to sell their stuff and promote their stuff and generally make a living by making music, arguing “[it] cannot work as a way of supporting new artists’ work.”

And the horror stories continue…