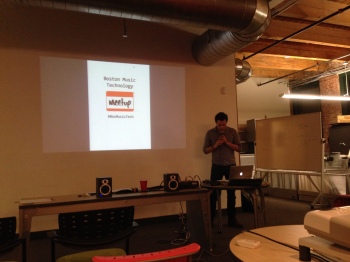 We might already be entering the era of music business 3.0.

That’s at least what the CEO of music technology start-up Gideen told me in my recent interview with him.

I like the term. It acknowledges that streaming and downloadable songs (music business 2.0) existed before this new wave of music tech start-ups.

And also acknowledges that streaming and downloads are, slowly but surely, failing musicians.

To be a musician has always been a very poor career move, but you could at least count on album sales to stay (kinda) afloat. That option’s gone, because most people aren’t willing to spend money on music. Digital downloads are dropping. Streaming pays tiny shards of pennies to artists.

So what kind of technology can actually help bands make music, distribute music and get paid? I went to a Boston Music Tech Meetup last week to find out.

The meet-up, which was organized by the CEO of MoodSnap, David Bluntenthal, had a pretty good showing. The event was located at the office of SonicBids in the South End, just past the illustrious Medieval Manor. There were around forty or fifty people, mostly musicians and techies, and some really amazing pizza.

The office space was open and cavernous, with the recently-refinished, brick loft style that’s becoming so common for tech companies. After about an hour of networking, there were five presentations from music tech start-ups.

Note: SonicBids has been around for a while, but I’m going to lump them into the sleek, search-friendly term of “start-up” anyway.

1. SonicBids – A Dropbox for Musicians

SonicBids is a platform for musicians to submit their work and find shows. Likewise, venues and event organizers can use it to put shows together. With licensing deals, electronic press kits and streamlined ways to submit stuff to festivals, the website can be a great resource for musicians that are looking to upload all of their stuff into one place.

CTO Mike Mepham and Product Manager Adam Sadowski gave a really in-depth talk about exactly how SonicBids was able to handle that deluge of media. Mepham and Sadowski said they want SonicBids to become “the dropbox for musicians.” There’s no embedded music or videos, everything goes through that platform.

Even when the numbers get crazy. Right now, SonicBids has about eight thousand songs a month uploaded to the platform, making for terabytes and terabytes of media.

The licensing opportunities and exclusive content ownership that SonicBids offers reminds me a little bit of Giddeen, but there’s also the built-in press kit component. Any band that’s tried to create a web presence knows that things get scattered fast – from YouTube to the website to social media to ReverbNation to BandCamp – so anything that can consolidate that media to one spot can be very handy.

Especially if it offers you an easy way to look for shows.

In the relentless pursuit of making everything free, a lot of music-enthusiasts have started making open source audio editing programs. Blame GarageBand, which taught everyone that these kinds of programs can be easy-to-use and pretty powerful, too… and they should cost absolutely nothing. 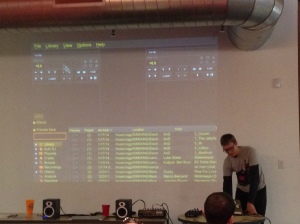 Mixxx has been around for a while, but co-founder Owen Williams talked about the advancements that the latest version can offer DJs. And everyone else, too. The new version of Mixxx looked pretty amazing, but, as always, I had my same fears of music being too free.

Maybe I should never have read “Are Millennials Crowdsourcing Themselves Out of Jobs?”

The next presentation showed off a very early-stage start-up, Musikata. Co-founder Alex Fords said that the goal of the program is to “help the world learn with an online musical education website… with a twist of zen and martial arts.”

The theory behind Musikata is that everyone can learn music theory if the learning is broken down into small sub-skills, like beat-keeping, each day.

Fords demoed a cool feature from the site: visitors (students?) click a mouse to keep up with an increasingly complex beat. You also get different color belts, depending on your skill level and achievements.

DropKloud’s a really intriguing start-up presented by founders Kedar Frederic and James DeNino. Essentially, the idea is that bands will be able to “drop” a song or album or poster at a location – from Starbucks to a street in Beijing – and, through the app, people will be able to explore their locations for that content.

So, if a band has an upcoming show at a bar, a cloud can be dropped there. The band doesn’t have to be at that location, but the fan does. If the fan is eating at that bar and wants to know the music schedule, he or she can open DropKloud and listen to the content that the band dropped there, then share the cloud with friends.

Clouds will only last for 48 hours, too, so the experience of exploring the clouds from different bars should – theoretically – not be too confusing.

What’s going to be really powerful is the analytics part of the app. According to Frederic, anything can be counted. That’s where the revenue will come into play, too. Bands can drop clouds for free, but they can see who downloaded their songs by paying, say, a dollar to drop an analytics-charged cloud.

The combination of social, local and mobile here may become a big draw, if this app gets picked up by enough music fans. It could also better help bands connect to local fans, instead of promoting online to the whole world. With local fans, bands can build a local audience that gets them better shows.

5. GroupTones – A Social Network for Musicians

GroupTones is a website that helps musicians form bands and collaborate on projects. Founder Dan Adler-Golden said that his inspiration was exactly that – trying to use Craigslist to find viable bandmates. He got tired of lugging his cello all over the Boston area just to practice and wanted a better way to collaborate. 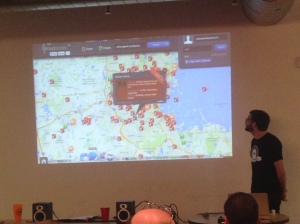 The website has already seen some strong success. While GroupTones set a goal of 1,000 members in the first year after a September 2012 launch, members grew to over 3,000 in the first year, most of them in the Boston area. Currently, the site has over 4,000 members.

GroupTones is free to use and basically displays a map of your area that’s overlaid with musician profiles. The profiles offer instrument information, skill sets, and samples of music. Venues can also use the site to hire a band or put together a concert.

The Future of Music Tech

It was really exciting to get out and meet so many people involved with the music tech scene in Boston. There was a real sense of passion as everyone talked about what they were working on, and the music scene as it stands in 2014.

The music tech space is in its very early stages. So early that most start-ups here are going to be boot-strapping for a while. The real problem for any start-up is revenue and target market. That’s especially difficult when it comes to offering any kind of music-tech service. Musicians don’t make money and listeners don’t want to spend it. Just loving music won’t pay the bills, unfortunately.

Even Pandora knows this. Despite egregiously small royalties to artists, the online streaming station is trying to cut royalties paid even more, because it has yet to actually become profitable. Although that hasn’t stopped Amazon.

I think the key to success for music technology businesses is going to have a lot to do with local and mobile – we can see those developments a la DropKloud and GroupTones and SonicBids. The one thing that can’t get commoditized by Digital Delivery is the experience, location, and community of a live show.

A lot of start-ups are created through passion, but they get funded when they can prove they have a business model. And, to do that, you first have to prove that people are willing to pay for the right kind of music technology.