Facebook has been something of a Rubik’s Cube for authors. Even if you take a look at some of the most famous authors’ Facebook Pages, you can tell that the teams pulling the strings have a pretty poor understanding of how it all works.

In my quest for authors who use Facebook effectively, I first came across the Facebook Page of E.L James, the author of Fifty Shades of Grey, and talked about why that Facebook Page worked.

But now, I’ve finally found Inglath Cooper, who has over 18,000 Likes and a really active fan engagement.

She doesn’t just write about herself

Almost every author’s Facebook Page is plagued by self-promotional posts that flood the screen. News about signings, books, and KDP offers become a vast, boring ocean with no land in sight.

Not the case with Cooper. She does what every business has found works on Facebook: she posts about things she thinks fans will be interested in.

Well, everyone likes inspirational posts. They get shared a lot by fans, which means the posts will get seen by your fans’ friends.

And animals figure prominently in Cooper’s books and personal life. Outside of her writing, she’s heavily involved in animal rescue.

So, it’s pretty common to see posts like this: 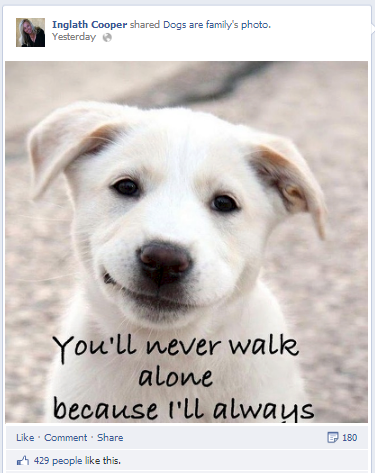 An advertisement on FacebookL 0 Likes, 0 Shares.

This tactic may sometimes work, but posting about your books on Facebook is mostly a waste of time.

People don’t use Facebook to intentionally search for products.

People “use” Facebook for entertainment and information that panders to their interests. You need to think about the audience of your book and post accordingly.

The truth is that a post with a dog that gets shared over 100 times is going to do a lot more for Cooper’s book sales than a post of the books themselves.

Here’s the action that would technically lead to sales:

But there’s something that makes the Page even more compelling: Cooper writes the posts herself.

Social media is all about bringing you closer to the people you admire.

Cooper’s Facebook Page is much more powerful and appealing because it’s personal. That’s why promotional posts seem so out of place, too.

Behind all of Cooper’s success on Facebook is one very basic principle: periphery marketing.